If you're looking for the flavor text for this event, see The Haunted Mansion (flavor text). 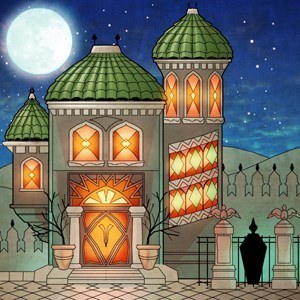 The Haunted Mansion can be reached from the [A card picturing a spooky house.] option in Cards Of Fate. During Halloween only, it can also be reached from Crossroads or from Happy Halloween!. It cannot simply be a random event.
(The Entrance Hall inside the mansion can be reached after giving the correct location to find the Weeping Angel after becoming the companion of The Doctor In The TARDIS, The First Floor can be reached by calling the Doctor with a Sonic Screwdriver after doing that but before entering the Secret Room, and the Secret Room can be reached right after receiving an item from Dorium Maldovar or by calling the Doctor with a Sonic Screwdriver after the Secret Room has been revealed with Arcane Vision but before an item is given in The Weeping Angel Interface.)

In the event, you begin outside of a mansion. You are given the options of visiting The Graveyard nearby, of going to The Entrance Hall of the mansion, and of simply leaving the event. (The first 2 options are selected through interactive art.)

Note that art for The Graveyard, The Alchemy Lab, The Cellar, The First Floor, and The Tower Room can contain a murder weapon that killed the Baron and/or a blood stain denoting the Baron's location of death.

Upon solving the Baron's murder mystery and obtaining The Baron's Combination Key, this event is replaced with The Mansion for all players for the rest of the game; the Entrance Hall will be missing The Baron, also Marigold will not revive you if you die in The Graveyard.

This is a special location for the Shovel. Items which can be dug up are Skulls (1 to 3) and Human Brain.

A ghost named Marigold tells you who murdered the Baron of the mansion in this event's flavor text. She then revives you upon continuing.

The Baron asks you if you can help him remember the details of his death. You can say no to simply leave, or you can say yes, after which he will ask what the murder weapon was, then where he died, and finally who the murderer was. If you answer any of the 3 incorrectly, he immediately kills you without asking anything else, and the event ends. If you answer all 3 successfully, you receive The Baron's Combination Key, the [Open the Baron's safe.] option is added to The Bank for all players, and The Haunted Mansion simply becomes The Mansion for all players for the rest of the game; the Entrance Hall will be missing The Baron, also Marigold will not revive you if you die in The Graveyard.

You can simply leave, or you can search the lab to gain a random item out of a pool including the following: Chloroform, Flask Of Mojo, Holy Water, Human Brain, Liquid Luck, Poison, Potion, Truth Serum, Unstable Mutagen, Volatile Oil.

Upon continuing, you select 1 location to go to out of Mystic Shop, Shady Dealer, Catapult, The Beach, and Church.

You can simply leave, choose the staircase to go to The Tower Room, or use your Sonic Screwdriver (even if it's on cooldown) to enter the Secret Room.

You can choose the Bookcase on the left, choose the Wands on the right, or simply leave.

Mystic Bob casts a spell on you.

You can choose to receive a Dark Wand or Light Wand or simply leave.

You enter the Baron's Secret Room. For more info on this, see The Doctor In The TARDIS.

Retrieved from "https://bgo.miraheze.org/w/index.php?title=The_Haunted_Mansion&oldid=23897"
Cookies help us deliver our services. By using our services, you agree to our use of cookies.