If you're looking for the flavor text for this event, see Middle Ages (flavor text). 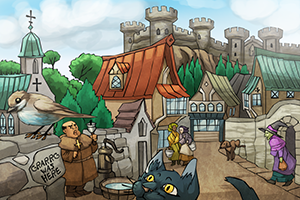 Middle Ages can be reached with the Gallifreyan Time Travel Neutral Effect, from It's... Bigger On The Inside! after saying yes in The Doctor In The TARDIS, from strapping on The Time Machine, from Crackling Lightning after pulling The Lever, or from the [A card picturing a castle.] option in Cards Of Fate. It cannot simply be a random event. (Also, the Robin Hood subevent under Travel can be reached from the [A card picturing a bunch of merry men.] option in Cards Of Fate.)

In the event, the player can choose to get a quest, visit a nearby town, or travel 2-5 spaces and get a random subevent.

Go on a quest[edit | edit source]

You gain a random Quest Gem (if you don't have one; if you have one, nothing really happens) and are told by Sir Lancelot of a specific reward one will receive for using the Quest Gem in such a way that completes the quest. The types of gem with their accompanying quests are:

The possible rewards are:

You are given a choice of going to the Church or to The Market.

Move 2-5 spaces forward. If the artwork then shown is of a valley rather than a path surrounded by bushes, and the flavor text says you go "through a mountainous valley", you can then mine with your Mining Pick for a generic item before continuing. Upon continuing, you go to one of the following randomly selected subevents:

You receive a Hammer.

You receive a Relic.

You are asked if you want to pay 4 Rupees to use a Catapult.

Retrieved from "https://bgo.miraheze.org/w/index.php?title=Middle_Ages&oldid=25120"
Cookies help us deliver our services. By using our services, you agree to our use of cookies.