If you're looking for the flavor text for this event, see Prehistory (flavor text). 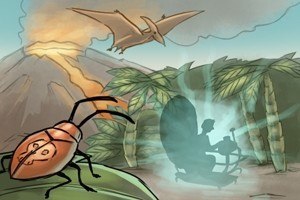 Prehistory can be reached with the Gallifreyan Time Travel Neutral Effect, from It's... Bigger On The Inside! after saying yes in The Doctor In The TARDIS (will be called The Prehistory), from strapping on The Time Machine, or from Crackling Lightning after pulling The Lever. It cannot simply be a random event. (Also, the Mammoths, One Tiny Bug..., Pterodactyl, and Tyrannosaurus Rex subevents can be reached from Creature Encounter!)

In the event, the player can continue and get a random subevent or use an Improbability Device to get the Tyrannosaurus Rex subevent.

Move 13-17 spaces forward and become Incapacitated. If you somehow remove/prevent the Incapacitation, you can capture a Mammoth with your Pocket Ball.

You can capture a Temporal Bug with a Pocket Ball or continue, triggering all players in the game to receive a random name from a pool matching their gender. (Multiple players can receive the same name.) Also, the finish line has a chance to be moved; if it does, it is moved 4-20(?) spaces forward or backward. (You can also catch a Temporal Bug after selecting continue initially.)

Randomly move 5-20 spaces forward or backward. You also have a chance to capture a Pterodactyl with your Pocket Ball.

You reach the The Glacier event.

Rarely reached as a random subevent or guaranteed to be the subevent if an Improbability Device is used. You get killed by the Tyrannosaurus Rex. If you had a death blocker or somehow come back to life, you can capture it with a Pocket Ball.

What? (The Whirlpool event)[edit | edit source]

Retrieved from "https://bgo.miraheze.org/w/index.php?title=Prehistory&oldid=27463"
Category:
Cookies help us deliver our services. By using our services, you agree to our use of cookies.