From Board Game Online Wiki
(Redirected from It's A Bomb!)
Jump to navigation Jump to search 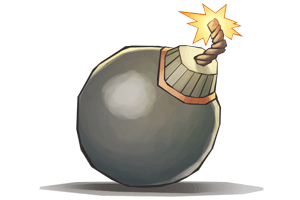 Bomb! can be reached from the [A card picturing an explosive metal sphere.] option in Cards Of Fate, and the almost mechanically identical Throw It Away! subevent can be reached by choosing the Dynamite Inside The Cave. It can also simply be a random event.

The player in control of the Time Bomb (will initially be the turn player) can either choose another player to give the bomb to or place the Bomb in their Bucket Of Water.

The Bomb explodes, sending the player who has it backwards.

The Bomb is a dud, so nothing happens. (This is quite rare compared to KABOOM!.)

Retrieved from "https://bgo.miraheze.org/w/index.php?title=Bomb!&oldid=20603"
Category:
Cookies help us deliver our services. By using our services, you agree to our use of cookies.