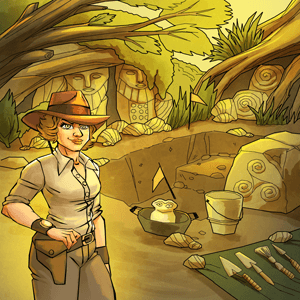 The Archaeology Dig is comprised of up to 4 Levels. At each Level, a crossroads will be found with a choice of 2 random challenges available in the level's pool of challenges. After beating each Level, you receive 2-3 Rupees. After the first 3 Lvs, you can choose to dig up a random treasure from that Lv's reward pool or continue on to the next Level; note that you can't continue after receiving a treasure, also note that you aren't shown the next 2 challenges you can choose from until after deciding to continue. After completing the 4th Lv, you are able to choose 1 out of 2 randomly selected legendary Artifacts.

Failure in a Lv 4 event will always result in the event killing you. Failure in a Lv 3 or lower event will always result in Incapacitation excluding dying due to jumping through the Cursed Gate without protection, picking a wrong exit in the Dark Passage, entering the Dark Passage with no way to see in the dark, or feeding the Starving Monster a Wacka Ball or Shroom Of Doom.

All other inherently Mechanical items (excluding inherently Unremovable items) each count as 1 item as of April 29th, 2020.

Retrieved from "https://bgo.miraheze.org/w/index.php?title=Archaeology_Dig&oldid=25887#Big(ger/gest)_Golem"
Cookies help us deliver our services. By using our services, you agree to our use of cookies.