If you're looking for the flavor text for this event, see The Future (flavor text). 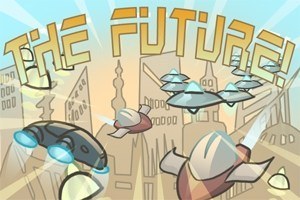 The Future can be reached with the Gallifreyan Time Travel Neutral Effect, from It's... Bigger On The Inside! after saying yes in The Doctor In The TARDIS, from strapping on The Time Machine, from Crackling Lightning after pulling The Lever, from the [A card picturing a futuristic city.] option in Cards Of Fate, from Happy Towel Day!, or from Hitchhiker's Guide To The Galaxy. It cannot simply be a random event.

You can either choose [Visit a shop.] to go to the Future Shop or choose [Explore the future.] to go to a subevent on this page as if you were going to one directly from The Future (with Futuristic City removed from the possible subevents).

You meet Chewbacca. You can capture him with a Pocket Ball. (It is unclear what happens if this subevent would be reached while Chewbacca is already in a Filled Pocket Ball.)

You gain an EMP Generator.

PlayerName
From The Future[edit | edit source]

You gain a Teleporter and a Phaser.

You gain an Improbability Device.

You can take the red pill to gain 12 turns of the "No." skill or take the blue pill to remove all removable Debuffs from yourself (excluding STDs if you have Sexual Immunity.) (Unremovable effects and passively granted Debuffs aren't removable. Also, the T-Rex Global Effect isn't removable despite technically being categorized as a Debuff.)

You gain a Strawberry Cake and a Phaser.

You gain a Space Capacitator.

You gain a Space Fluctuator.

You gain the The Force skill. (If you already have the skill, its cooldown is reset if possible.)

WTF Is This Shit?![edit | edit source]

You gain the Skip-A-Turn status.

You get killed by Zoidberg. If you can somehow use your Pocket Ball, you can capture him with it. (It is unclear what happens if this subevent would be reached while Zoidberg is already in a Filled Pocket Ball.)

Retrieved from "https://bgo.miraheze.org/w/index.php?title=The_Future&oldid=27466"
Category:
Cookies help us deliver our services. By using our services, you agree to our use of cookies.